Who Are Those Composers ~ E. Guerin 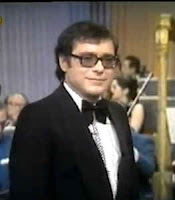 E. (Eddy) Guerin was born José Manuel Gracia Soria in Melilla, Spain in 1935. Eddy started at the Hot Club of Barcelona, ​​a temple of jazz that emerged in the 30s. He never became the conductor of the Casino du Liban orchestra (1962) in Mameltein, on the Mediterranean, a little while away from Beirut. The Casino du Liban competed with the whole of Las Vegas when Beirut was, between 1953 and 1975, the Paris of the East and the epicenter of finances and fun of half the world. Lebanon had been a French protectorate and French was spoken; Eddy lived a French fantasy at the highest level.

Eddy, abandoned everything and moved to Spain in 1973 ... after the Civil War in Lebanon broke out in 1975 ... and the entertainment capital collapsed.

In 1999 he became the musical director of Antena 3 TV. Those were happy years that he kindly remembers.

Eddy then focused on the world of music, producing for record labels and artists ... until 2003 when he retired from the business.