Enzo G. Castellari: "My tough cinema between cowboys and executioners"
The director of "Keoma" and "The citizen rebels" from the mess with his father to the association with Franco Nero up to the tribute of Tarantino. 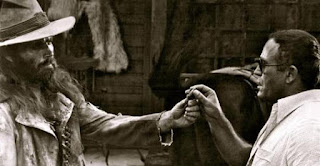 [Enzo G. Castellari with Franco Nero on the set of Keoma]

The name of the Girolami family is carved in the history of Rome. Literally, because the statue of the boxer at the Stadio dei Marmi has the features of Marino Girolami, then European champion and later director of comedies among the most prolific and appreciated. Gathering the witness, since the '60s, the founder of a family that has gone through Italian cinema since the post-war period has been Enzo G. Castellari (where G. stands for Girolami), cult director like Keoma, Il grande racket , The shark hunter, I go ... I kill him and I come back, The police incriminates, the law acquits ...

Nero, the protagonist of many of his films, said: "I chose to work with Castellari because they all spoke ill of me". Why, according to you?
«After some experience to help I immediately switched to directing and this has caused some envy. Also because in those years the films to do were many and the competition was very high. Being a son and nephew of directors and an actor's brother, they thought I had a lot more chances. And it's true, what luck I had! I had left to do something else. I graduated in architecture but the DNA eventually won. And then I had to help my father make a movie a month. While he was preparing the scenes and shooting, I was dedicated to editing and mixing the previous film and so on, it was a chain. He also directed six films a year, and I enjoyed myself like crazy. "

What was the most important meeting for your career?
"There are many. Like the one with Alberto De Martino in '66 (director and screenwriter: Il Consigliori, L'assassino è ... on the phone) at the western village of the Balcazar brothers in Barcelona. So many people walked around there, they gave you horses and extras, but it was quite disgusting. I had to help in a spaghetti western by José Luis Madrid, a bad director. When we found ourselves in Rome, De Martino proposed me as an aid to a film in which they did not want "horse", that is stuntman and masters of arms. So I started walking alone. The first director was a film that my uncle Romulus could not shoot. The stroke of the class was the choice of the title: I go ... I kill him and I come back, like Eli Wallach's sentence in Il buono, the ugly and the ugly of Sergio Leone. He made a bang, also because the title often decrees the success of a film. It is the theory of mecoglioni and 'sti cazzi, which I learned from De Martino. Just say the title of the film aloud, and see which one of the two options comes out spontaneously ... Another dogma of De Martino was: the lame laughs, the blind man blows, the mother who speaks little more! They are the small "laws" of genre cinema ".

Do you like today's Italian cinema?
"No, because boredom reigns. The great beauty of Sorrentino will also have won the Oscar, but two balls ... Beautiful images, eh, but it is a copy of Fellini. Among the directors of today I like the Manetti Bros and Matteo Garrone. With Marcello Fonte, the protagonist of Dogman awarded in Venice, I also shot a short film in which he played a pedophile ».

Manetti and Garrone, directors who often draw from the genre cinema ...
"They're not the only ones. Stefano Sollima (directed the TV series Romanzo criminale and Gomorra </ CF> and the films Suburra and Soldado) knows all my films. De Cataldo, the magistrate author of Romanzo Criminale, I met him in court and he told me: «Maybe I did you the movie ...».

The directors of "policemen" have always been branded as fascists. You have the aggravation of always wearing the black shirt ...
"I've got it right now, but that's because I'm a little color-blind, so I have all the same coats so I can not be wrong! I tell you one thing. A few years ago I was in a social center where they projected The citizen rebels. At the time of the debate I took the floor: "They always gave me the fascist and the right-wing extremist, but do you know that my grandfather was killed by a squad because he was a friend of Matteotti?" Frost. My father later found them all. One pretended to be a priest, another had moved to a village. And he charged her, one by one. But the point is another. In that film criminals ruin the life of a good person who, while the state does nothing, is forced to take justice alone. Well, if this means being fascist then yes, I'm fascist. Even the boys from the social centers proved me right ».

The Rome of the 60s was the cradle of cinema, but not only.
"I think I lived in the most beautiful moment of humanity. In the most absolute sense. In Fregene I often met Ennio Flaiano. What a genius. With my wife we ​​often entertained with her daughter, who had great health problems. He knew about this couple who dedicated time to that unfortunate creature, and came to thank us. A beautiful relationship was born ".

Even the meeting with his wife seems like the beginning of a film.
"I knew that we were kids, at the slow motion of editing. I chased it for years. "

Quentin Tarantino was inspired by his Inglorious bastards for the almost homonymous film. It's a nice tribute.
"A great honor. When we reviewed my film together, he played all the lines by heart. He laughed like crazy, and he smashed my shoulder with punches! Fuck you man !, he repeated. What laughter. He is a fan of our cinema, he has seen everything. Even The hateful eight, in certain atmospheres remembers Keoma, my best movie. Among my favorites there is also Il grande racket, with Fabio Testi. And the Shakespearean western Johnny Hamlet. Too bad for the Italian title, That dirty history of the west. It makes you say: and sticazzi ... ".