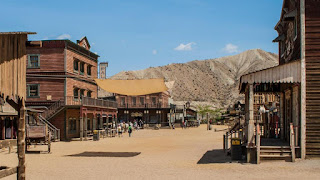 The famous explorer Máximo Cristóbal Valdespino affirms that the North American border "is a beautiful land, it reminds me a lot of Almería"

During the decade of the 1960s, Almería was the scene of many westerns. The deserts of the area offered the perfect landscape to recreate the adventures of the American West. At the end of the 1950s the first films began to be recorded, but it was during the following decade and thanks to Sergio Leone when the location became especially popular. The Italian director charged there the trilogy of the dollar: A Fistful of Dollars, For a Few Dollars, The Good, the Bad and the Ugly.

In total more than 300 westerns were taxed in the desert of Tabernas, Almería. But it has also been the set of great films like Indiana Jones and the Last Crusade or Lawrence of Arabia. Currently, the sets that used to be the villages of the Westerns have become a theme park that attracts tourists from all over the world and in which some advertisements and video clips are recorded.

This crucial part of the history of the American western and the Spaghetti Western appear in Red Dead Redemption 2, the new title of Rockstar Games. Concretely it happens in a secondary mission in which Arthur Morgan knows Máximo Cristóbal Valdespino, a famous explorer who is looking for treasures for the North American border. During the conversation, Máximo affirms that the border "is a beautiful land, it reminds me a lot of Almeria".

This detail is just one of the many hidden references in Red Dead Redemption 2, which is added to, for example, the homage to the biographer of Unforgiveness or to the opposing families of For a Fitful of Dollars.
Posted by Tom B. at 1:51 AM