Rocky Rider was a gunman and a friend of the Indians. It was a series designed mainly by M. Uggeri and later by Loredano Ugolini who is known above all as the author of Billy Bis, Junior and Cristall.

Ugolini was one of the most prolific designers of the Universe and - together with Lino Jeva - co-author of numerous characters, which we often see him on this blog and give you the chance to appreciate its evolution and versatility.

With Rocky we see him grapple with the western; always on the Monello of 1967. The nice cover is by F. Corbella. The story is told by riding at breakneck speed and with abrupt bucking. 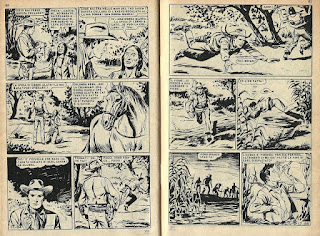