Who Are Those Composers ~ Sven Gyldmark 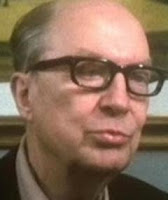 Sven Rudolf Sidenius Gyldmark, was  born in Søllerød, Denmark on April 21, 1904. He was a composer, chapel master and pianist. The son of actor Oscar Peter Nielsen (1858-1926) and Christine Petrine Lovise Nielsen (1861-1912), he was the youngest of a large family, of which four became musicians. He was originally a classical pianist and was educated in piano at Alexander Stoffregen and in organ music and musical theory by organist Charles B. Hansen and also received training in instrumentation. As an accompanist to the silent movies of the day, he developed his compositional skills early on. In 1927 he composed "Two Brown Eyes", which became the start of extensive production. In the 1930's a music competition was printed, and his wife suggested him to send in a melody. Sven was not so much for doing that but did it anyway, and it became a little sweet melody titled: ‘Ten little dirty fingers’. From 1933-37 he played with his brothers Leonard and Hugo in the Gelsenburg-Trio restaurant ensemble, and in these years he published a number of instructional piano books and compositions. In 1934 he wrote the music to the "Athens of Athens" and in 1937 he got his breakthrough as a film composer through collaboration with Emil Reesen about the film "Plat or Krone". Later, independent assignments followed with the Marguerite Viby films "Frk. Wildcat" (1942) and "Theatrical Tosset" (1944). Besides the movies, the Copenhagen theaters had been praying for him. In 1942 he joined a position as chaplain master at the People's Theater, which lasted until 1949. But first and foremost he was composer and wrote revolver songs, piano pieces and film music. During the 1940s, he developed his great talent for composing catchy and popular melodies for the Danish films. For the series of Morten Korch film he composed "I Have My Horse, I Have My Lasso" (The Old Gold, 1951), "It Was On The Round Tower" (It Was On The Round Tower, 1955), "You're My Eyebrow" (Flint's Sons, 1956) and "Are You so with the Birds of the Sky "(Vagabonderne at Bakkegården, 1958). To the first of the four films he composed "It's Summer, It's Sun and It's Sunday" (Father to Fire, 1953), "Hi for You and Hello to Me" (Father to Four in the Snow, 1954) and "To Christmas ball in Nisseland "(Father of Four in the City, 1956). In addition, he is the author of melodies such as "Mom is the Best in the World" (1951), sung by Victor Cornelius, "There's Always a Tram and a Girl to" (1953), sung by Dirch Passer and Ove Sprogøe and "Susanne, Birgitte and Hanne "(1960), sung by Otto Brandenburg. The auditors also had a bid for him - and he was a permanent supplier to the Circus Revue in the years 1936-1969 and created "Solitudevej", "Mariehønen" and "Who Have You Kissed in Your Street Door"? In 1957 he received the Bodil Prize for the music for the film "Bundfald". Sven Gyldmark was brother of the chapel master and composer Hugo Gyldmark (1899-1971) and composer Oskar Gyldmark (1893-1977). He was married on August 22, 1925, in the church of Capernaum Sogn in Copenhagen with Aase Tove Jacobsen (1906).