Campo Imperatore is one of the most desirable mountain tourist destinations in central Italy and a location that highlights a relevant film culture.

Campo Imperatore was the set of cult films such as, “They Call Me Trinity” and “Trinity is STILL My Name” by Enzo Barboni, starring Bud Spencer and Terence Hill.

The Abruzzese plateau of the Gran Sasso and Monti della Laga National Park is one of the most filmed areas of cinema and television, with more than 40 films filmed there. Thanks to the presence of numerous villages such as Castel del Monte and Castelvecchio Calvisio, they have staged several films in the area.

Recall the Thriller, “The American” with George Clooney, a film of medieval setting like "The Name of the Rose" by Sean Connery, still “Ladyhawke” by Richard Donner with Michelle Pfeiffer to name a few.

Among all of them, how can one forget the historic "They Call Me Trinity", a spaghetti western, in a comic vein, where Spencer and Hill thrilled the Italian public with their unmistakable "trademark". 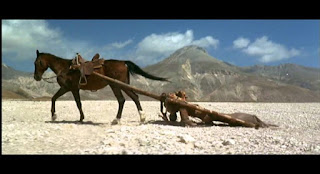