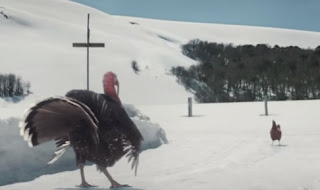 Battle of the birds: Chicken and turkey go beak-to-beak in KFC Christmas ad

KFC is using the festive period to remind people that while turkeys are for Christmas, chickens are for the other 364 days of the year.

Did you know there’s only one day of the year you can’t get KFC? If you didn’t, KFC is about to make sure you never forget, as it lets one of its resident chickens out of its box to remind its poultry arch-nemesis who’s really boss.

All in the spirit of Christmas, of course, with the tense 60-second spot looking to hammer home the message to the nation that while Christmas is for turkey, “chicken rules the roost” for the other 364 days of the year.

As KFC’s marketing director Monica Pool says: “We close our restaurants on the 25th allowing turkey to have its moment in the sun. Every other day of the year, you needn’t worry, KFC will be there.”

The cinematic homage to the chicken, which has been created by creative agency Mother, will run across TV, online, press, outdoor and cinema.

This will include a number of what KFC is calling “sharp truisms,” such as: “Best of luck with the turkey this Christmas” and “The trick to enjoying Christmas turkey? Lowering your expectations.” (Surely there should be something about ‘dead meat’ in there too?).

Earlier this year KFC was forced to close its doors, not because of a turkey invasion but because it ran out of chicken.

Its witty response to the fiasco has become one of the most talked about ads of the year – a year which also saw KFC’s dancing chicken become 2017’s most-complained about ad after ruffling the feathers of 30,000 people.

You Tube link:
https://www.youtube.com/watch?v=fM5wUJUXBAc
Posted by Tom B. at 1:53 AM