On this date in 1968 “The Ruthless Four” starring Van Heflin, Gilbert Roland, George Hilton and Klaus Kinski premiered in Rome, Italy. The film relied on veterans Heflin and Roland to carry the weight of the dialogue while Hilton and Kinski supplied support in an awkward relationship of a possible homosexual relationship. More character analysis than action packed western it still delivers enough to make it one of the better films of the genre.

After many years of work, miner Sam Cooper discovers a gold-bearing vein. Unable to bring all the gold with him, Sam is forced to blow up the mine entrance and return to town. After arriving in town he sends for his godson and asks him to help him carry out the gold. The godson of Sam comes along with a strange man that seems to dominate his will. Cooper, while not trusting the newcomer, he is forced to accept his help. The trio is soon joined by another man, an old friend of Sam. The four reach the mine and after days of hard work recover the gold and start their way back to town. Soon differences begin to surface within the group and the conflict culminates in the death of three of Sam’s employees. So only Sam reaches town with the load of gold. 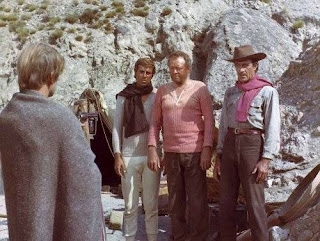