When Col. Mortimer arrives at the Tucumcari station he spots a wanted posted for outlaw Guy Callaway. Being a bounty hunter he begins to study the poster and while doing so the station master tells him Guy saw the poster and told him he was insulted and that he was worth way more than the posted reward and added the two zeros himself. When Mortimer goes to one of the local saloons he asks the bartender where he might find Callaway and after first being given a shrug of the shoulders he’s told by the bartender’s eyes looking above he wouldn’t know where he’d be. Taking the hint Mortimer goes upstairs and here laughter coming from one of the rooms. He unrolls the wanted poster and slides it under the door and knocks. He’s greeted by several bullets coming through the door. When the camera shows the wanted poster the added zeros have disappeared and the original price is $1,000 is seen. (?) 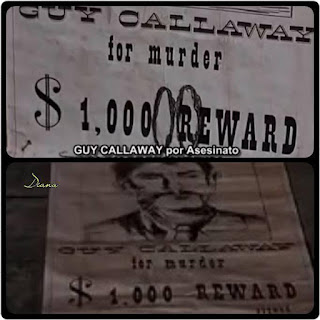