This comic book was published in 12 series. Each series featured the adventures of a different set of characters. The entire series was published on September 7th 1946 and ended October 1, 1956. It was published in Mila, Italy by Leonello Maritini and G. Caregaro for editor ALP.

Series III Jane Calamity (12 pages). Jane Calamity (JC), was a daring interpretation of the legendary female figure Calamity Jane by the screenwriter Max Massimino Garnier and drawn by Lina Buffolente. It is presented by the publisher as the first Italian comic-strip for adults. The appendix features "The Man of Space" by Paul Campani. The comic book was 12 pages in length 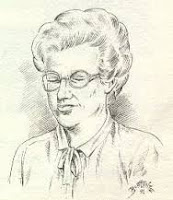 Born in Vicenza, Italy on October 27, 1924, Buffolente graduated from the Brera Academy and started her career in 1941, collaborating with the cartoonist Giuseppe Cappadonia and illustrating short stories for the publisher Edital. In 1942 she created together with Leone Cimpellin her first comic strip series, Petto di Pollo, published by Edizioni Alpe.

After World War II, Boffolente specialized in adventure and western comics, notably drawing the series Tom Mix, its spin-off Tom Bill, Hello Jim and Furio Mascherato. In 1948 she started an over twenty-year long collaboration with the publisher Editrice Universo, for which she realized various series including Liberty Kid for the magazine Intrepido and Fiordistella for Il Monello.

In the 1970s Boffolente illustrated Piccolo Ranger and created the series Gun Gallon, Homicron and Nick Reporter for the French market, and the series Reno Kid for the German market. Starting from 1990 she drew several Comandante Mark comic books.