We continue with our search for filming locations for “Adios Sabata”. After Sabata and the others have been arrested Major Matternach has Sabata, Escudo and Ballantine placed before a firing squad. Watching from his headquarters is Colonel Skimmel and Folgen. The Colonel gives Matternach the order to commence the procedure. Septiembre and Gitano, dressed in soldiers uniforms watch from a nearby rooftop. Sabata notices one of the barrels of gun powder being loaded in the wagon is leaking powder and leaving a trail along the ground. Ballantine opens his diary to a page containing two vials of nitroglycerin. Ballantine halts Matternach and asks his diary be sent to his mother. He throws him his diary which explodes killing all of the soldiers in the firing squad. Sabata, Gitano and Ballantine retrieve the soldiers rifles and Septiembre and Gitano also open fire on the soldiers. A Gatling gun is quickly wheeled in but Sabata ignites the trail of gunpowder from the leaking     barrel and blows the Gatling gun and barrels of gun powder. Another Gatling Gun is brought into play but Gitano uses a rope and swings down and takes over the use of the gun spraying lead into to the oncoming soldiers. Now a cannon is wheeled into action by the soldiers. Septiembre takes out a guard in the watchtower with one of his steel balls. The cannon begins to open fire on Sabata and his men. Sabata retrieves some more nitro from the warehouse and takes out the cannons. Sabata and Escudo run to Skimmels headquarters building and start to eliminate the guards. Ballantine and Septiembre run into the warehouse but are followed by several soldiers with another Gatling gun. During the shooting the soldiers shoot the wagon where a large barrel is tied and Ballantine sees gold dust pour out.

This scene was filmed at the DeLaurentis Mexican village outside of Rome. Also used in the “5 Man Army” and “Texas Adios” (aka “The Avenger”). 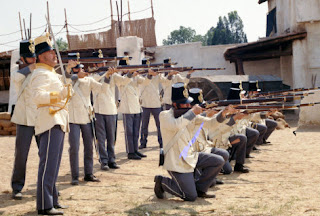