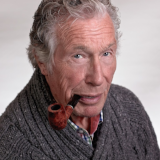 German film, radio, actor, voice dubber Christian Rode died in Berlin on February 20th, He was 81 years-old. Born in Hamburg, Germany on July 20, 1936 he first appeared on stage and then worked his way to film and television. Beginning in the 1960s he reinforced his career by becoming a voice dubber. He can be heard giving his German voice ot such actors as Michael Caine, David Carradine, Craig T. Nelson, Robert Culp, Christopher Plummer, Barry Bostwick and Dennis Farina. He was also the successor in 1985 of Wolfgang Kieling as spokesman for Bert on the "Sesame Street". Rode appeared in two Euro-westerns: “Thunder at the Border” (1966) and was also the voice of Boris Dvornikand in the 1968 TV western “Wind in den Zweigen des Sassafras” as Carlos. Rode's voice can also be heard in