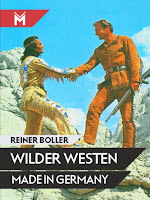 Wilder Westen made in Germany

German Western productions, these are above all the iconic Karl May films of the 1960s. But from the silent film era, the German Wild West film has had its traditions. Actors such as Lex Barker, Pierre Brice, Stewart Granger, Hans Albers, Hellmut Lange, Gojko Mitic and recently Wotan Wilke Möhring and Nik Xhelilaj embodied the men of the West. The cinema and television audience holds this unusual as special Genrevariation in the cultural memory.

"Wild West made in Germany" describes this very special phenomenon based on its films and its stars. Author Reiner Boller has researched the subject for years, visited archives and film locations, and personally spoke to many of the participants - especially the classic Karl May films. During his research, he was particularly supported by Matthias Wendlandt, whose father produced the famous Winnetou series in the 1960s, and by Christian Becker, the producer of the RTL remake.