For years Drew Hayden Taylor, prolific playwright and author of dozens of Canadian-Indigenous books, has noticed a high proportion of German tourists visiting Canada, many who have come looking for a real “Indianer” experience (what Germans call the North American Native lifestyle).  Inevitably, almost every one of these Germans will relate stories of Winnetou: Germany’s most famous, but mythical, Apache warrior. Winnetou was their childhood hero. As one museum curator explained: “Winnetou is like Superman for the German people”.

Fascinated with this phenomenon Taylor spent last summer in Germany trying to uncover the over 100-year roots of its Winnetou obsession. There Taylor revealed camps where thousands of Germans dress and attempt to live like Indigenous people. This discovery kicks off a mind-bending journey through history, art, politics, and controversy.

Even Adolf Hitler and much of the Nazi elite were bizarrely obsessed with North American Native warriors.

“I did not expect to see thousands of Germans dressed in traditional Native outfits, nor reveal that even Hitler himself was obsessed with the Lakota people for years”, says director Drew Hayden Taylor.

The film is a fascinating exploration of “cultural appreciation vs appropriation” from the perspective of one of Canada’s most beloved Native writers. 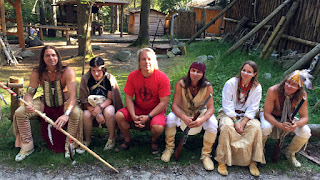 Author and playwright Drew Hayden Taylor was living in Dawson City, Yukon when he noticed that large numbers of German tourists were flooding into Canada’s westernmost territory. Demand for tours was so high that a German airline had added a direct flight from Frankfurt to Whitehorse, serviced by a 767 jumbo jet. He was surprised to discover that these German visitors were extremely curious about local Indigenous groups.

But where did these German tourists develop a passion for Indigenous culture? This question would take Taylor and a team of filmmakers to Germany, where they discovered a fascination with North American Indigenous culture that traces back more than a century. That journey is documented in CBC Docs POV film, Searching for Winnetou.

The fascination started in the 19th century

Interest in North American Indigenous culture can be traced back to the popularity of the German translation of James Fennimore Cooper’s romantic novel The Last of the Mohicans published in 1826. But the genre really exploded with the publication of the Winnetou novels written by Karl May, starting in the 1890s.

The novels feature a German engineer Karl known as “Old Shatterhand” who teams up with Winnetou, an Apache chief. They become blood brothers and travel west in search of adventure.

In real life author Karl May was a petty criminal who never even visited the “wild west” of North America; he fell in love with stories about Indigenous people that he found in literature. Everything May knew about First Nations came from a combination of library studies and a wild imagination. And his Winnetou novels are considered the bestselling book series in the German language.

A giant entertainment industry is devoted to Winnetou

The Winnetou books have spun off an entire film and theatre industry in Germany.

In the 1960s several films were made about the adventures of May’s fictional Apache warrior. Winnetou was played by French actor Pierre Brice in a series of West German films. The former Tarzan, Lex Barker, played his white sidekick, Shatterhand. Although the films were only loosely based on May’s stories, they introduced him to a new generation of fans.

At the same time the East German Winnetou, Gojko Mitic, came to be known as The Brad Pitt of East Germany. His first “western” film sold 12 million tickets in East Germany, a feat considering that at the time the country’s population was 17 million people.

Today “Karl May Spieles” take place throughout Germany, adapting Karl May’s books to the stage. The largest is in Bad Segeberg and is performed in front of a quarter million people every summer in a packed 7,000 seat amphitheatre. The epic production features live horses, pyrotechnics and even a trained bald eagle.

Around Germany are various “Indianer” camps where hobbyists erect teepees, fashion tomahawks, bead leather and hold powwows. As the hobbyist Igor says in Searching For Winnetou: “Being Indian is freedom!”

The word “Indianer” is the German version of “Indian.” While this archaic usage is widespread, many intellectuals have adopted it to refer to the white hobbyists that “play Indian.” Enlightened Germans prefer to use the modern terms popular in Canada or to refer to individual Nations by name, (like Apache, Cree, Haudenosaunee etc) to differentiate the real cultures from the “Indienthusists’. 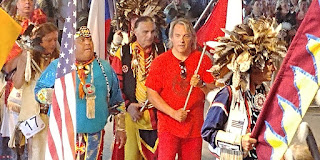 It’s not unusual to see a blond haired blue eyed German dressed in meticulously beaded buckskin and feathers, carrying a coup stick and a tomahawk. And not just in the hobby camps. If you keep a sharp eye, you might spot a “lifestyle Indianer” on the streets of Berlin or Munich.
The Native obsession is linked to nature

Forests in Germany are meticulously manicured. With the exception of a handful of national parks, nature is extremely ordered and unsightly undergrowth is removed. Wilderness is rare and where it does exist, solitude is nearly impossible.

There is an intense craving to see a real “wild” landscape, filled with chaotic life and unencumbered by people, technology and government. The tales of Winnetou equate the world of the Indigenous North American with that wild, free nature.

With a population of about 36,000 people spread over 474,712 sq kilometres, the Yukon has a population density 0.1 persons per square kilometre making it an obvious destination for Germans wanting to experience the real 'Indianer' lifestyle. It’s no surprise Germans travel there by the jet-full.
‘Indianers’ were closely watched in East Germany

Under the watchful eye of the Stasi secret police, the “Indianer” hobbyists were simultaneously supported and oppressed by the communist regime.

East German “Cowboy and Indian” stories almost always sided with the “Indian” against the greedy Yankee cowboys that sought to oppress them. Despite this politically useful message, the hobbyist movement also embraced the lifestyle of going to the country and living like the “Indianer,” surviving on one’s own terms, unencumbered by rules and government. The cover of “anti-Imperialism” allowed the hobbyist to carry on with their anarchistic lifestyle.

But the secret police were quick to react to any possible sedition and the declassified Stasi files on the hobbyists fill an entire room from floor to ceiling.
The dark side of ‘Indianers’

Disturbingly, Adolf Hitler and other high-ranking Nazis were also massive fans. The Lakota-Sioux, a nation of plains Natives, was elevated to the status of honorary Aryan. (There is no record of any member of the Lakota-Sioux trying to test what this meant in practice.) Hitler believed that, if the Nazis were to invade, Native Americans would greet them as liberators.

Today, there are still some neo-fascists who believe that the Indigenous peoples lost to Europeans invaders because they failed to resist and fight the outsider. They adopt Indigenous ways as a ritual to reinforce their own crude belief in racial purity and the need to keep the “other” from destroying the tribe.

Luckily, this is a very small minority of hobbyists. Most of them are just curious about another culture and how they live.