A look at Australian westerns

WHEN you think of a western it conjures up images of sprawling American landscapes with action heroes such as John Wayne or Gary Cooper riding horses and rounding up bad guys.

But there were also westerns with kangaroos, bushrangers and stunning Australian vistas. Sometimes known as “kangaroo westerns” or “meat pie westerns” — inspired by the expression “spaghetti western” coined for Italian versions of the genre — these films have long been a part of our cinema history. Often an attempt to cash in on American westerns, they were a unique part of our own history bearing similarities with the American Wild West.

The latest “meat pie western” is Sweet Country, which opens on Thursday. Set in the Northern Territory Outback in 1929, it centres on an indigenous stockman on the run after killing a cattle station owner in self-defence. It has the familiar elements of a western — the cowboy on the run from the frontier lawman — but with a distinct Australian flavour. 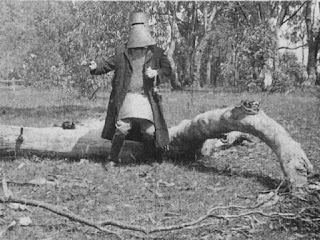 The 1903 American film The Great Train Robbery established the western genre. It was about a group of outlaws who rob a mail train, but are chased by a posse and killed in a shootout. It introduced some western conventions, including good guys versus bad guys, chases on horseback, gunfights and tough cowboys.

Australian producers also had a rich vein of stories and characters they could mine for similar kinds of films. The Story Of The Kelly Gang premiered in 1906. Although not the first film about bushrangers, it kicked off the “meat pie western” genre. It had the good guys, bad guys, gunfights, horseback chases, but it also had bandits in metal armour. While based on a true story it embellished truth for dramatic effect. 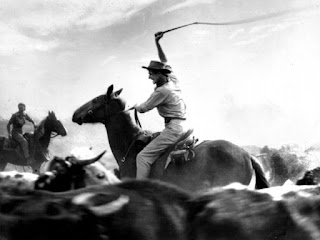 
In 1911 and 1912 the NSW, Victorian and South Australian governments spoiled some of the fun by banning depictions of bushrangers in films, concerned that criminals were being turned into heroes. But there was plenty of other Aussie material for “meat pie westerns”, although some opted for American input.
Australian celebrity boxer and swimmer Snowy Baker contracted with American filmmakers to make three outback westerns in 1920. They imported American directors Wilfred Lucas and Bess Meredyth to shoot The Man From Kangaroo and The Jackeroo Of Coolabong about life on an outback station, and The Shadow Of Lightning Ridge, about a bushranger. The films had gun and fist fights, trick riding and made Snowy a bigger star. He later went to the US and did some more films but taught other actors useful skills such as sword fighting. 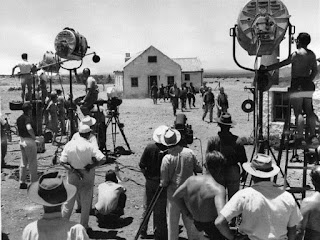 [Shearers leave the hut and walk to the cookhouse during shooting of The Sundowners at Corunna sheep station, Iron Knob, South Australia in December 1959.]

Hollywood had a hand in 1936 film Rangle River, which was funded by Columbia Pictures. Based on a story written by great American western pulp writer Zane Grey, it had a blend of American elements (including a whip fighting scene that was censored in Britain) and Australian accents. It was released in the US as The Whip Fighters.

Captain Fury (1939), set in convict-era Australia, was filmed entirely in the US. Despite having Snowy Baker’s brother Frank as a technical adviser, it lacked authenticity. Apart from a smattering of gum trees, it looks like somewhere in the US.

Although 1946 film The Overlanders was a contemporary drama, it was about rugged stockmen (Aussie cowboys) driving cattle across the Australian outback and is generally considered an Australian western. Made by Britain’s Ealing Studios, it had Australian government funding so it could show Australia in a good light.

The Yanks once again thought we needed help and, in 1950, sent actor Jock Mahoney to star in The Kangaroo Kid. Based on a story by an Australian writer, it was about a detective from the US Remington agency sent here to track down a notorious robber. 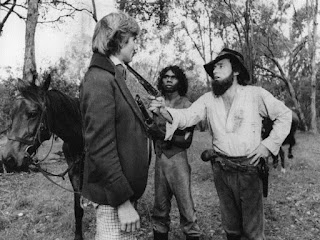 American actor Robert Mitchum starred in the British-made 1960 film The Sundowners, based on Jon Cleary’s novel. It lacks gunfights and bandits, but there is plenty of action and some tough shearers. Mitchum’s Australian accent wafts between cockney and American but he has undeniable star power and while the film flopped in the US it did well here and in the UK.

The ’70s saw a rediscovery of the bushranger western, with Englishman Mick Jagger cast in the title role of the 1970 film Ned Kelly, and American actor Dennis Hopper as Dan Morgan in the 1976 film Mad Dog Morgan. But neither did well at the box office. 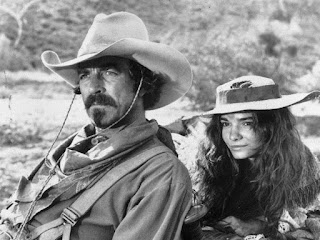 [Actor Tom Selleck with Laura San Giacomo in a scene from TV program Quigley Down Under in 1990.]

The Man from Snowy River, adapted from Banjo Paterson’s poem about a young master horseman and the ride that made him a legend, was a big success in the ’80s and spawned a sequel. And Kirk Douglas was the token Hollywood star to help make it successful overseas. The US sent Tom Selleck to star in Quigley Down Under 1990, but it flopped.

Another “meat pie western” to make an impact was The Proposition in 2005, a bushranger film starring Guy Pearce, which also had a haunting soundtrack by Nick Cave.