The two gun Kansas Kid character was created in 1948 by Angelo Saccarello
and graphically by Carlo Cossio.

Supposedly the son of the famous Wild Bill Hickok and an Indian Sioux, the Kansas Kid is a gunslinger who, after avenging his father's death, lives exciting adventures together with his inseparable companion Furth. His deeds and adventures were presented in the first 10 books of the first series were written by Angelo Saccarello and drawn by Carlo Cossio were published from January 1 to March 4, 1948. The series was published by ADC at the Publishing House Ippocampo Editions in Milan, Italy. 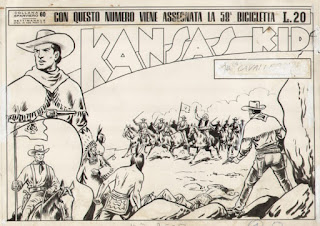 Carlo Cossio was born on January 1, 1907 in Udine, Italy and was an Italian animator and cartoonist.

Carlo had two brothers: Gino and Vittorio. He began his career creating, together with Vittorio, some animated short films, starting in 1928.

Later he dedicated himself to comics, working in the Cartoccino dei Piccoli; later the fascist regime censured all the foreign comics, and Carlo Cossio was among the authors who created the Italian heroes; which gained fame in 1938 with Dick Fulmine (scripted by Vincenzo Baggioli), published in L'Audace, to which he continues to work until 1955.

He also drew stories for Gim Toro and, among the last works before his death on August 10, 1964, in Milan, Italy.