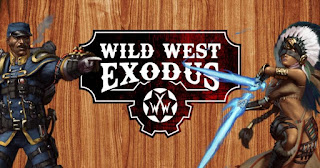 Today we’re going to be taking a look at a game I’ve been wanting to dive into for a very long time and only recently got the opportunity to get the final pieces in place to bring to you. Today, we’re going back to the rough-and-tumble world of the American West with the second edition of Wild West Exodus, the dark alternate-history game set in a high-tech version of the 19th century American frontier, and beyond.

The game originally came to life in 2014 as the brainchild of Battlefoam CEO Romeo Filip. Originally launched with five distinct factions (Lawmen, Outlaws, Union, Warrior Nation, and Enlightened), the roster was expanded in 2015 to add four additional factions (Confederate Rebellion, Dark Nation, Golden Army, and Watchers). While the game did have a lot of initial success and interest from the gaming community, a combination of internal and external factors led to the slow decline of the game overall. Wayland Games spinoff Warcradle Studios acquired the property in October of last year and quickly began work on the second edition. The open beta launched in late June, and the full second edition hit shelves just three short months later.

Check it out using the link below

https://techraptor.net/content/wild-west-exodus-2nd-edition-review
Posted by Tom B. at 6:43 AM