Who Are Those Guys? - Poldo Bendandi 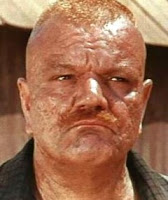 Leopoldo Bendandi was born in Ravenna, Italy on June 8, 1920. He operated a restaurant called “Wimpys Grill” in San Bartolo Fiorenzuoila until it closed in 1963. He then made his first film appearance in “I due evasi di Sing Sing” (1964). Because of his looks, big, bald, pock marked face, he is usually cast as a villain, blacksmith, townsman or henchman. He has appeared in films directed by Vittorio De Sica, Louis Malle, Carmello Bene and Sergio Leone. In his eight Euro-western appearances he’s billed as Poldo Bendandi. His last film appearance was in “I racconti di Viterbury - Le più allegre storie del '300” (1973).