Who Are Those Gals? - Alma Beltran 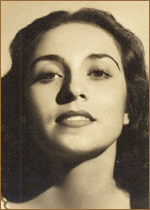 Alma Leonor Beltran was born in Sonora, Mexico on August 22, 1919. Although born in Mexico she appeared in mainly American films beginning with the musical film “Pan-Americana” in 1945. Her career spanned more than 50 years and over 90 films and TV appearances. Her only appearance in a Euro-western was as the Mexican widow in “Another Man, Another Chance” (1977). Beltran died in Northridge, California on June 9, 2007. She was 87.