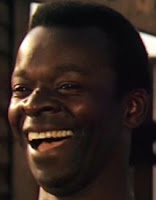 George Fisher was born on July 2, 1927 in Harlem, New York City, New York of African and West Indian parentage. Peters set his sights on a show business career early on, at age ten. A product of New York City's famed Music and Arts High School, Peters initially fielded more odd jobs than acting jobs as he worked his way up from Harlem poverty. Landing a stage role in "Porgy and Bess" in 1949, he quit physical education studies at CCNY and went on tour with the acclaimed musical. His film debut came in “Carmen Jones” (1954), but he really began to make a name for himself - having changed his name to Brock Fisher, in 1953 - in such films as “To Kill a Mockingbird” (1962) and “The L-Shaped Room” (1962). He received a Tony nomination for his starring stint in Broadway's "Lost in the Stars". Brock appeared in one Euro-western “Ace High” (1968). Peters died at age 78 of pancreatic cancer on August 23, 2005 in Los Angeles, California. Today we remember Brock Peters on what would have been his 80th birthday.