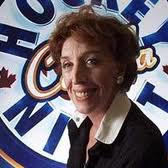 Dolores Olga Claman was born in Vancouver, British Columbia, Canada on July 6, 1927. Claman received a graduate scholarship to the world renowned Juilliard School of Music in New York and went on to enjoy a prolific career in composing for advertising, television, film and theatre. In 1967, Dolores co-wrote the memorable song: "A Place to Stand (Ontari-ari-ario)"  for the Ontario provincial government's Canada centennial project and the Oscar-winning film, "A Place to Stand". Claman composed the score for one Euro-western “Captain Apache” (1970) and worked with Lee Van Cleef in his recordings of two songs for the film “Captain Apache” and “April Morning”. Dolores is best remembered as the composer of “The Hockey Theme” aka  “Hockey Night In Canada Theme” which was written in 1968. It has become one of the longest running theme songs in broadcasting history. Today we celebrate Dolores Claman’s 85th birthday.