THE MARK OF ZORRO 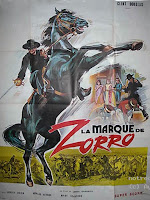 Zorro performs his usual dual role as a fop and a vigilante, while a new Governor of California arrives with his daughter. The new Governor wants to usher in an era of peace, but the colonel in charge of his armies is corrupt, preferring to continue preying on the people of California, robbing them and killing any who oppose him. Caught up in the mess is Juan Aguilar, a Californian opposed to the colonel who finds himself falsely accused of murder. It’s up to Zorro to prove his innocence, the guilt of the colonel, and establish peace.