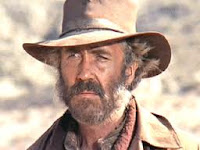 Jason Nelson Robards, Jr. was born on July 26, 1922 in Chicago, Illinois. The son of stage and film star Jason Robards Sr. [1892-1963], he was  raised mostly in Los Angeles. A star athlete at Hollywood High School, he served in the U.S. Navy in World War II, where he saw combat as a radioman. Returning to civilian life, he attended the American Academy of Dramatic Arts and struggled as a small-part actor in local New York theatre, TV and radio before skyrocketing to fame on the New York stage in Eugene O'Neill's "The Iceman Cometh" as Hickey. He followed that with another masterful O'Neill portrayal, as the alcoholic Jamie Tyrone in "Long Day's Journey Into Night" on Broadway. He entered feature films in “The Journey” (1959) and became an even greater film star. Robards won consecutive Academy Awards for Best Supporting Actor for “All the President's Men” (1976) and “Julia” (1977), in each case playing real-life people. He continued to work on the stage, winning continued acclaim in such O'Neill works as "Moon For the Misbegotten" and "Hughie." Jason appeared in only one Euro-western “Once Upon a Time in the West” (1968) as Cheyenne that most of us remember him by. Robards was married to actresses Rachel Taylor from 1959-1961, Lauren Bacall from ’61-’69, and production assistant Lois O’Connor 1970-2000. He is the father of actors Jason Robards III [1949- ] and Sam Robards [1961- ]. He died of lung cancer in 2000. Today we remember Jason Robards, Jr. on what would have been his 90th birthday.