The Iroquois Trail in Croatia 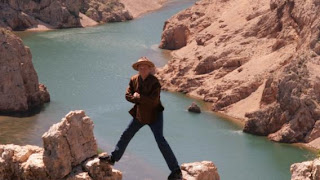 It began 50 years ago in the Paklenica canyon in Croatia, the shooting of the first Winnetou film, "The Treasure of Silver Lake". Today, many Karl May fans travel to the pale mountains of the legendary Apache chief and its inventor to see the filming locations.

Every day Marin Marasovic watched as the horses and Indians passed his parent’s home. Always in the morning they rode past his street and headed for the Paklenica canyon. Marin was still a child and did not know what was going on. Today, 50 years later, he can explain everything in detail. "My whole life I've spent with Winnetou, I’ve seen all the films, read all the books."

In the summer of 1962 the shooting began for "The Treasure of Silver Lake". It was the first film and was released that same year and captivated the audience with the scenery of the rugged gorges and natural beauty, which conjured up visions of the vastness of America. In fact, some places were turning Winnetou only a few yards behind Marin's parents’ house in the Croatian Starigrad.

In the mountainous area around the Paklenica National Park a dozen westerns were shot in the 1960s. Today filmmakers are Karl May fans and remember the author, who died 100 years ago - and his most famous character.

The Paklenica gorge still offers an impressive spectacle, but dangling from the high granite walls, on ropes, are climbers, and the once-wild river has been tamed.

But as soon as you move into the canyon, you can see the original, wild nature. The pale mountains peer through the roof of the surrounding forest. They are barely covered. On the plateau is blowing a brisk wind blows dead branches before him. A scene made for Western filmmakers.

After two or three hours you will feel close to Winnetou and his Apaches, softly humming the theme tune of the composer Martin Böttcher and respond with a feeling of brotherhood. Hiking is a good way to see the Croatian hinterland, get a feeling for nature, and an insight into the Winnetou scenery.

To visit the main sites of the region, it takes a jeep with a guide such as Zvonimir Cubelic. When he was born, the movies had been filmed long before. But the Indians have his childhood memories tied up in his mind and have never let go. His enthusiasm goes so far that he even does daredevil climbing at locations in order to stand in for the tourists’ motif.

In the flat landscape near the coast the visitor suddenly looks down to the earth below. The "Zrmanja" is working its way through the gorge; high above Zvonimir does gymnastics over the rocks, making Indian noises and waits until the cameras stop clicking. For Winnetou it is the river Rio Pecos and the Colorado where a career was made. "Looks like the Grand Canyon, but it’s in Croatia," said Zvonimir who nods proudly. 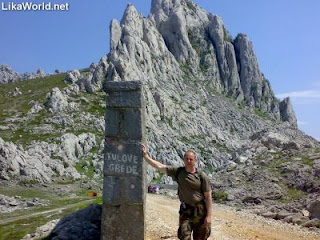 A little later the Winnetou tourists overlook the striking mountain massif of Tulove Grede - Winnetou in the universe Tsil Nugget - whose spires dominate some of the most action-packed and emotional moments of the films. Another half-hour ride takes you up on gravel roads where road signs warn of land mines, a dangerous legacy of the war-stricken ex-Yugoslavia.

The grave of Intshu-tshuna and Nsho-chi is a must see for all visitors. From afar, the two rocky pyramids can be seen under which Winnetou's father and sister have their final resting place. For some fans the place is so overwhelming that they feel a need to cry. Fortunately, there are close to the Karl May fan box. There, the fans have written their feelings. The pages can be summarized as follows: overwhelmed, beautiful, tears in my eyes. Greetings from Bavaria, Austria and Switzerland. Zvonimir then describes how Mario Adorf as the gang leader Santer came to his end when he crashed into the ravine. "I play now but not after," he says, smiling mischievously. "There were no stunt men; actors had to do all the stunts himself."

Marin Marasovic, waited 50 years for the Indians and later searched for his chance to get closer to the legend. He was invited to meet Pierre Brice in his hotel in Stari Grad, talking and laughing with him and asked Winnetou if he did not remember a little boy, who every day was wide-eyed at the roadside.