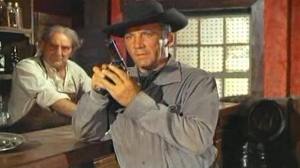 Sentenced to twenty years hard labor for a crime he did not commit, Minnesota Clay escapes from prison, driven not only by an instinct for liberty, but by a desire to return to Mesa Encantada, New Mexico, home of the reluctant witness to his innocence. Suffering from the loss of his eyesight he finds the city is being fought over by two gangs: one led by the fierce Ortiz, a Mexican general defector, the other led by Sheriff Fox, the man who remained been silent at his trial. The two leaders would benefit from the help of Clay, who has a reputation as an expert marksman with a pistol, but he is disgusted by these proposals and refuses, turning both against him. Clay is then hunted and luckily manages to find refuge with his newfound daughter Nancy and old friend Jonathan. Ortiz is then eliminated by Estella, but Clay must now face Fox in a duel, directed by his hearing, he wounds Fox and forces him to confess the truth publicly that Clay was not involved in any crime.

[There are two endings that exist for this film. One - he lies dying in the arms of his daughter. Two - he rides off later wearing a pair of glasses. Stopping he throws his glasses in the air and shooting the lenses out of the frames while smiling to himself.]