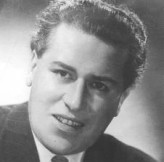 Robert Joseph Farnon was born on July 24, 1917 in Toronto, Canada. Farnon became a composer, conductor, musical arranger and trumpet player. As well as being a famous composer of original works (often in the light music genre, but also for film and television), he was recognized as one of the finest arrangers of his generation. In later life he composed a number of more serious orchestral works, including three symphonies, and was recognized with four Ivor Novello awards and the Order of Canada. Farnon composed over 30 film scores among them were two Euro-westerns: “The Sheriff of Fractured Jaw” (1958) and “Shalako” (1968). Robert died on April 23, 2005 at the age of 87. Today we remember Robert Farnon on what would have been his 95th birthday.