Who Are Those Guys - Domingo Beltran 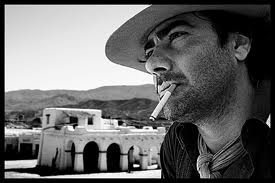 Domingo Beltrán Sánchez was born on May 15, 1969 in Almeria, Spain. Along with his brother they have appeared in numerous films as stuntmen and are still working in films today. Domingo began his career in stunts in the late 1980s and his first western film appearance was in “Lucky Luke” (1991) with Terence Hill. Today Domingo works as a stuntman in Texas Hollywood near Almeria, Spain, where he appears in stunt shows almost every weekend.