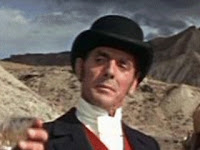 Comedian Eric Sykes has died at the age of 89.

He is perhaps best known for his TV work, including starring roles in 60s sitcoms ‘Sykes And A...’ and ‘Sykes’ during the 70s.

During his career he worked with fellow comic icons Peter Sellers, Spike Milligan, Tommy Cooper and Tony Hancock, as well as striking up a popular double act alongside Carry On star Hattie Jacques in both ‘Sykes And A...’ and ‘Sykes’

On the big screen he starred in such classics as ‘Monte Carlo Or Bust’, 'The Plank' and ‘Those Magnificent Men In Their Flying Machines’ before a number of more serious roles since the turn of the century in ‘The Others’ opposite Nicole Kidman, as well as a cameo in ‘Harry Potter And The Goblet Of Fire' and his only Euro-western 'Shalako' as Mako the butler.

Keeping himself busy well into his twilight years, Eric Sykes also showed up in ‘The Bill’, ‘Holby City’, ‘Doctors’, ‘New Tricks’, ‘Last Of The Summer Wine’ and ‘Heartbeat’ over the past decade.

His last role was alongside David Suchet in the 2010 episode of ‘Agatha Christie: Poirot’, titled ‘Hallowe’en Party’.

Sykes began his career on the airwaves, writing material for Frankie Howerd following the Second World War. He then moved in front of the microphone to lend his talents to the almighty ‘Goon Show’ opposite Harry Secombe.

He was made honorary president of the Goon Show Preservation Society, of which the Prince of Wales is a patron.  In 2005 he released his autobiography titled ‘If I Don’t Write It, Nobody Else Will’.

He had four children with his wife of sixty years Edith Milbrandt.