Who Are Those Gals? - Esmeralda Barros 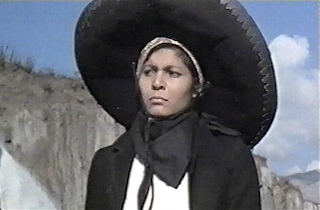 Esmerlinda Barros was born on September 4, 1944 in Ilhéus, Bahia, Brazil. A mulatto, Esmerlinda started as a dancer in the nightclub shows of Carlos Machado aka "The King of the Night". She appeared in the local Renaissance Club’s beauty contest in 1964 where the winner goes on to appear in the Miss Brazil contest. Many feel she finished second in the Renaissance Club contest because of her professional status as a performer. Barros attracted enough attention to be offered film roles in Brazilian and Italian films and television novellos. While in Italy she was called Esmeralda Barros and appeared in six Euro-westerns but her most remembered role was as Eva the savage jungle girl in "Kong Island" (1968) with Brad Harris. Later she appeared in the July 1976 edition of the Brazilian Playboy. After her career ended she returned to Brazil and as of 2011 was a grandmother and living happily in Rio de Janeiro.

[Thanks to Daniel Camargo for obtaining Emeralda’s correct birthday via a phone conversation with Ms. Barros on October 7, 2011.]
Posted by Tom B. at 6:35 AM