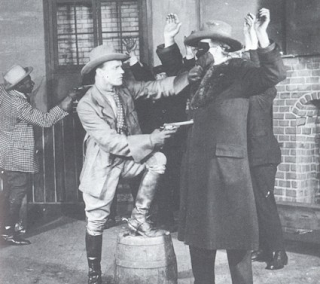 In "Jack, Sam and Pete" (1919), based on the popular boys’ stories by S. Clarke Hook, three cowboys rescue a kidnapped child. It was a starring vehicle for Percy Moran, the pre-war star of the stirring "Lieutenant Daring" adventure series, who clearly hoped to create a new character to excite a young audience. One of the trio in the title, Pete, was played by Ernest Trimingham, Britain’s first black actor.
Posted by Tom B. at 6:21 AM