Who are Those Guys? - Francisco 'Paco' Barrilado 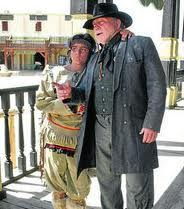 Francisco Lopez Barrilado was born in the suburb Calle Santa Ana in Almeria, Spain in 1944. Affectionately called Paco, he was a stuntman in the Leone films and many more Euro-westerns filmed in Spain. He claims he was the one who bought the poncho in Nijar that Clint Eastwood wore in the ‘Dollar’ films. He also claims to have taught Clint how to move the cigar in his mouth because Clint was not a smoker.

"My mother had to work like a beast to take us forward. My father went away and she became a cleaning and washer woman to feed three children. When I was seven years-old I had to leave and face all the faults of the World, but not I am ashamed of my past. "

His first school was the school of the Franciscans. "I was admitted there because my mother washed the robes to the priests of the church." After the school I went to the Quemadero, long enough to learn to read and write. At age eleven he was working as an apprentice carpenter in a shop on the street Alegrias. "Then I became a wood carver and cabinetmaker helping Juan Antonio Criado and sanded logs in the workshop of Jesus de Perceval". Always a very physical person Francisco became interested in body building and being poor would lift stones instead of weights. His fearless attitude led him to work in Germany, he became a paratrooper, worked as a mason climbed scaffolding without thinking twice. He and some friends formed a group of actors and put on medieval jousting tournaments. He became an extra and stuntman during the late 1960s when films were constantly made in Almeria. When the filming slowed he became a weight lifting coach and heavyweight boxer from 1973-1977. and had 6 professional fights winning once and losing five times. Through his boxing and other physical abilities he was the one man everyone went to in southern Spain to become a weight lifter or boxer. Paco opened Barry Gym which he runs today. He recently completed a film he produced, wrote, directed and appears in with his grandson called "The Dream Film" made in Mini Hollywood.