Who are Those Guys? - John Bartha 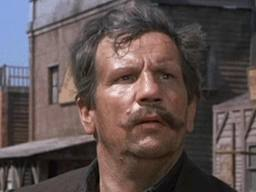 János Barta is a Hungarian film actor born in 1920 in Budapest, Hungary. He started his film career in 1951 with an appearance in the Hungarian film "Teljes gözzel". With his friend and fellow actor Tom Felleghy they moved to Italy in the early 1960s. Here Barta’s name was Anglicized to John Bartha and he went on to appear in over 90 films from 1951-1981. His familiar face was seen in over 30 Euro-westerns. Bartha along with Luis Induni were often cast as sheriffs, law officers and military men in the majority of their western films. Bartha’s probably best remembered as the sheriff of Mesilla in the "Good, the Bad and the Ugly". The Man with No Name after capturing Tuco turns him over to Bartha and when the hanging takes place he shoots the hats off the lawman and several spectators before riding out of town and splitting the reward with the now freed outlaw. As far as Bartha’s long time relationship with fellow Hungarian Tom Felleghy, Bartha married singer Erzsi Paál and for reasons only known to Bartha did not invite Felleghy to the wedding and their friendship dissolved at that point. Paál died in 1975 and Bartha’s career ended in 1981. Rumors abounded that he was living in a trailer park and forgotten and abandoned. Where and if he is living today is unknown.