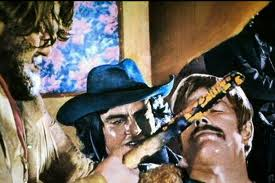 Ted and his gang pull off a bank robbery and Ted hides the loot. Meanwhile a wounded and dying man hands over a map to buried money to Joe, a poor hunter who has rescued him. Ted’s henchmen find Joe and torture him to try and make him reveal what he knows. The burns inflicted on him make him go blind. The band take advantage of Joe’s weaknesses for Rosy, the madam of the saloon he promises to lead them to the money. When the gang take Rosy and Joe to their hideout he is beaten by robbers, who take the map and go for loot. Joe, who has since regained the use of the eyes, exterminates the bandits but during the fight Rosy takes advantage of their distraction to flee with the money. Recklessly she tries to cross a swollen river and is swept away. Joe, who tries in vain to help Rosy, is left standing alone with nothing.
Posted by Tom B. at 6:31 AM