Who Are Those Gals? - Mercedes Barranco 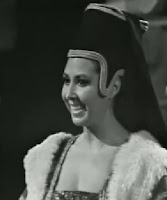 Mercedes Barranco was born in Barcelona, Spain, date unknown. She first appeared on stage at the age of 16. This launched her early career as a stage actress often under the direction of José Tamayo [1920-2003]. In 1953 Mercedes made her film debut in "Fantasía española" directed by Javier Setó. She also appeared in such films as "El baile" (1959) and "Vestida de novia" (1966). She also had a long career in television appearing in many dramas for Spanish TVE during the 1960s and 1970s for Primera fila and Novela TV series. In her later years she turned to film dubbing and was known as the voice of Barbara Bel Geddes on TV’s "Dallas". Mercedes appeared in only one Euro-western, "Mutiny at Fort Sharp" (1967) with Broderick Crawford. Mercedes was married to actor Jose ‘Pepe’ Calvo and passed away on July 5, 2008 in Madrid.