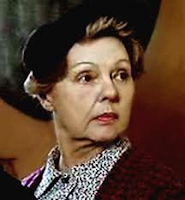 French film star, Paulette Dubost passed away on September 21, 2011 at the age of 100. appeared in more than 150 films during her 81 year career. She was a witty, naughty and clever comedienne in many French comedies of the 1930's. She also proved to be good in dramatic roles, such as Ginette in "Hotel du Nord" (1938) and Lisette in "La règle du jeu" (1939). Paulette Dubost was born Paulette Marie Emma Deplanque in Paris, France, on Ocotber 8, 1910. Her father was a petroleum engineer and her mother a singer at the Opéra Comique. Paulette began her career at the age of 7 at the Opéra de Paris. At 17, she switched to operetta and played for two years in "Les Aventures du roi Pausole" (The Adventures of King Pausole) at the Bouffes Parisiens with Simone Simon, Edwige Feuillère and Viviane Romance. Her naughty look and her voice were quickly noticed by film makers, and from 1930 on she played roles in films by Jacques Tourneur, Jean Renoir, Andre Cayatte, Gilles Grangier and Max Ophuls. In "Le Roi de Champs Elysses" (1935, Max Nosseck) she appeared opposite the famous silent film star Buster Keaton in a dual role. She played a supporting part in "Hotel du Nord" (1936), the second in Marcel Carne's trio of 'fatalistic romantic melodramas' starring Annabella and Jean-Pierre Aumont. Her most famous film from this period is Jean Renoir's "La Règle du jeu" (1939). Though it's now regarded as one of the great classics of the French film, it was not warmly received on its original release in 1939
After the war Dubost co-starred with Danielle Darrieux in "Au Petit Bonheur" (1946, Marcel L'Herbier), derived from a stage play, written by Marc Gilbert Sauvajon. She appeared in the interesting Swiss post-war drama "Four in a Jeep" (1951, Leopold Lindtberg) starring Viveca Lindfors and Ralph Meeker. Max Ophüls then gave Paulette Dubost parts in Le plaisir/Pleasure (1951), based on three short stories by of Guy de Maupassant, and Lola Montes (1955) starring Martine Carol. In 1992, she published a memoir entitled C'est court la vie (It's a short life). Even in old age she continued to perform in films. Her last film appearance was in the short film Curriculum (2007, Alexander Moix). Paulette Dubost is currently 99 years old. She was married to Andre Ostertag from 1936 till 1944. They have a daughter, born in 1942. Paulette appeared in one Euro-western "Viva Maria!" (1965) as Madame Diogène with Brigite Bardot and Jeanne Moreau. - By Bob Holland
Posted by Tom B. at 7:38 AM