Who Are Those Gals? - Liz Barrett 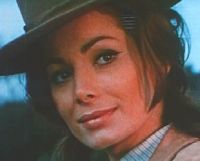 Luisa Pasqualotto Baratto is an Italian actress who often used the pseudonyms Liz Barrat, Liz Barret, Luise Barret, Louis Barrett and Liz Barrtee. Although to the Italian film industry she was just another pretty face that flooded the film world in the 1960s she found stardom for a brief period in the mid to late part of that decade. Appearing in only 11 films she’s remembered for her roles in 1965's "Bloody Pit of Horror" with Mickey Hargitay and her roles in five Euro-westerns. Her last film was "Colpo de stato" in 1969. As far as I know she left the industry and her whereabouts are unknown.
BARRETT, Liz (aka Liz Barrat, Liz Barret, Louise Barret, Louise Barrett, Liz Barrtee) (Luisa Pasqualotto Baratto) [Italian]Kill and Pray - 1967 (Lo)
Killer Kid - 1967 (Mercedes Hernandez) [as Liz Barret]
Payment in Blood - 1967 (Manuela) [as Louise Barrett]
The Long Day of the Massacre - 1968 (Lara) [as Liz Barret]
Two Pistols and a Coward - 1968 [as Liz Barrat]
Posted by Tom B. at 6:10 AM