I WANT HIM DEAD 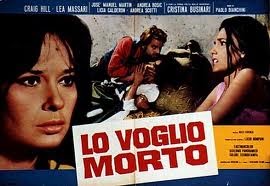 With the Civil War winding down, Clayton, a cowboy, goes to see an old friend to buy his farm. The transaction was to be settled in Southern currency, but with the Confederacy losing the war it is now worthless. Meanwhile, Clayton's sister, who is staying in a nearby hotel, is killed by two outlaws and, when Clayton returns to the hotel he finds her body in the hotel room. With no help from the local sheriff he goes in search of the killers. He traces them to a local ranch and there he finds two young women basically kept as slaves to serve a group of bandits. In helping the two women he finds out one has overheard a conversation that Mallek, the leader of the gang, is a supplier of arms to the Southern cause and all of his assets are invested in continuing the war. An unexpected meeting between two senior officers from the north and south, to negotiate peace, endangers the whole deal. Mallek then promises a reward of one hundred thousand dollars for his band if they disrupt the meeting. One of the women, Marisol, is killed, while the other Aloma, rides off with Clayton. Clayton manages to stop the disaster and, after killing the murderers of his sister, also discovers that Mallek and the rest of the gang have killed each other over the $100,000 reward. Clayton, along with the Aloma collect the money and return to buy the ranch.

Youtube link: http://www.youtube.com/watch?v=PheitU-jkQc
Posted by Tom B. at 6:29 AM