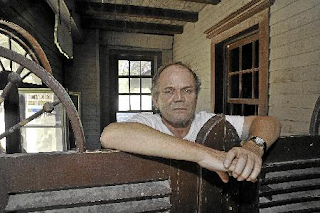 From the Voice of Almeria
September 11, 2011
Juan Gabriel Garcia

Dan Van Husen is another of those great actors who took their first steps in the profession among the arid locations of Almeria and whose efforts made possible the dream of cinema in Almeria. Now he has returned for a few days to the province to participate in the activities of the Western Film Festival. Van Husen, whose resume includes titles such as "A Bullet for Sandoval" and "El Condor" among many more dreams of the day Almería regains its film glory.
You're a globe-trotting actor. For ten days I was in Bulgaria with the film "Tom Sawyer and Huckleberry Finn ', then came here and then I go to Sweden to present the same western that I have here ("The Scarlet Worm"). I’m always on the road.
What are the memories that come to mind walkig on the film locations again? The nature and wilderness. It's a unique place I've never seen anywhere else. Recently I have been in Arizona and this is much better. There are things that are not seen anywhere in the world, is fascinating.
Was it hard filming in Almeria? No. We were young. I started at 24. Here it is hot and the dust, but it was the best time of my life.
Are we witnessing a resurgence of European Western in the world? As of 1976 it fell into oblivion. For the past five years people have revived talk of westerns, they are increasingly seen on television and the Internet and have a legion of followers.
Has genre appreciated over time. The European westerns were different. The bad guys were really bad and good were also very bad. Almería contributed to the aesthetics of the genre with the colors of your landscape.
What did you do in your free time of the shooting? There was little money in Almeria. At night, after spending all day shooting in the desert, we stayed at the bar.
You worked on "El Condor", a film that a large fort was built and decorated with the same name. I have so many photos. I recall many anecdotes. Most impressive was the set of "El Condor"', something truly spectacular.
Was it a learning time. Yes, but an actor is always learning. At that time, I was continually filmin in Almeria.
Have you visited the House of Cinema? Yes it is a very good museum. One thing that surprises me is that the Spanish actors who worked here, people like Lorenzo Robledo, Aldo Sambrell, Ricardo Palacios and Eduardo Fajardo, who live in Almeria, there are no pictures of them. It is a situation that needs to be changed.
What has been lacking in Almeria to have kept its position as a movie set? It’s missing a studio. You can not make a movie outdoors only.
That would be an enormously expensive production. We must make an investment to make it a reality. If you decide to build a studio I am willing to work together to re-shoot here.

During the closing ceremonies of the 2011 Almeria Western Film Festival, Dan was given a Lifetime Achievement Award for his participation in the Euroean Western. Congratulations Dan an honor well deserved.
Posted by Tom B. at 9:18 AM