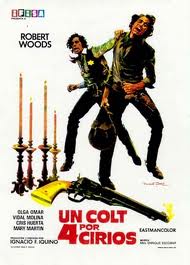 Enrique Escobar Sotés was born in Jaen, Linares, Spain on September 2, 1921. Little to no information on him is available. What is known is that Escobar worked closely with director Ignacio Iquino on his films and behind the scenes. Escobar scored many of Iquino’s films besides being a film editor, accountant, personal secretary, house painter and executor of his will. He used several aliases during his career such as Henry Escob, Henry Escobar and Henry Soteh. Enrique composed scores for 11 Euro-westerns from "Joe Dexter" (1965) to "The Fat Brothers of Trinity" (1973). A few of the better known titles are "Stagecoach of the Condemned" (1970) with Richard Harrison, "Four Candles for Garringo" (1971) with Robert Woods and "Twenty Paces to Death" (1972) with Dean Reed. Escobar died on February 12, 2004 in Barcelona, Spain. Today we remember the mysterious Spanish composer Enrique Escobar on what would have been his 90th birthday.
Enrique Escobar Sotés. Composer, pianist and conductor, born in Linares, Spain on August 2, 1921 and died in Barcelona in 2004. He studied piano and Law in Granada, but from the outset he decided to pursue a life in music. He worked as a pianist in Madrid and Barcelona, and also lead various orchestras. After several tours of Latin American countries he arrived in Barcelona where he finally settled and dedicated to the end of his life the writing of musicals for the stage and composing soundtracks for several films of the sixties and seventies.
Thanks to Daniel Maier for the additional information.