Voices of the Spaghetti Western ~ Catlow 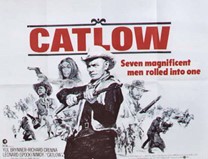 Constantino Romero Garcia was born on May 29, 1947 in Albacete, Castilla–La Mancha, Spain. He was known as a voice over actor for many famous actors. Among his notable appearances in Castilian Spanish versions of foreign-language films, he was the voice of William Shatner as James T. Kirk in ‘Star Trek’, Arnold Schwarzenegger as the title character in “The Terminator” film series, Sean Connery as William T. O'Niel in “Outland”, Roger Moore as the title character in the James Bond franchise and James Earl Jones' role as Darth Vader in the Star Wars franchise. His voice also appears in the Spanish dubs of several Disney films, including “The Lion King” as Mufasa, “The Hunchback of Notre-Dame as Frollo”, “Mulan” as the Supreme Ancestor, and in “The Jungle Book 2” as Shere Khan.

Romero retired on December 12, 2012, after his last job as a voice actor: “Trouble with the Curve”. He announced it through his Twitter account: "Thanks for the affection. It's been 47 years of work. And a whole life. Radio, TV, theatre, dubbing. It's been worth it. A hug. That's all folks! " (in English in the original). He showed his thankfulness to his fans with the words "I've always known that the best part of my job were people". Romero died from complications of amyotrophic lateral sclerosis on May 12, 2013 in Barcelona just two and a half weeks shy of his 66th birthday