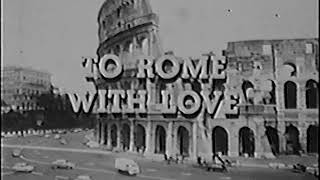 To Rome With Love – episode West of Rome

To Rome with Love is the story of widowed college professor Michael Endicott, who decided to leave his native Iowa following the death of his wife and accept a new position as an instructor at the American Overseas School of Rome. The culture shock of his children in reacting to their new environment, and to an extent, his own, provided the main humor in the series. Family situations provided most of the rest. Early on, much of this came from Endicott's single sister, Harriet, who followed them to Rome, apparently for the sole purposes of dissuading them from living there and to cajole them into returning to Iowa. Harriet soon departed, but her place was taken shortly afterward by Andy Pruitt, Endicott's father-in-law and the children's grandfather. He came to Rome for a brief visit, but wound up staying indefinitely.

Episode Story: Michael Endicott (John Forsythe) almost gets fired from the set of an Italian western, when he questions the authenticity of everything and the judgement of the film's director