Star Wars fans who were looking forward to more of Book of Boba Fett's live-action Cad Bane should check out the actor the character was based on. 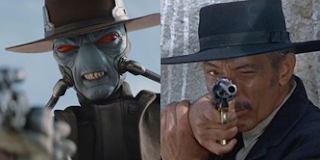 A lot of Star Wars fans were disappointed by the messy storytelling and soft-edged characterization of The Book of Boba Fett. Cad Bane’s mind-blowing live-action debut was one of the show’s highlights. Introduced in The Clone Wars, Bane was modeled after screen legend Lee Van Cleef. Bane exhibits the actor’s tall, slender physique, his confident swagger, his ice-cool stare, his effortlessly intimidating on-screen presence, and the same kind of wide-brimmed hat worn by Van Cleef in his most iconic spaghetti western roles.

Some viewers criticized the way that The Book of Boba Fett’s creative team translated Bane’s appearance into live-action. The version of Bane played by Dorian Kingi (with returning voice actor Corey Burton) has a more defined chin and a higher mouth than his cartoon counterpart. But, arguably, this Cad Bane resembles Van Cleef even more than the animated one. This Van Cleef characterization pairs beautifully with The Book of Boba Fett’s Leone-style cuts between glorious wide shots and intense close-ups.

The only downside to Bane’s appearance in The Book of Boba Fett is that he’s introduced way too late and killed off way too early. He’s given a jaw-dropping introduction in the sixth episode, then stabbed to death in the seventh. Star Wars fans who want to see more live-action Cad Bane should go straight to the source and watch Van Cleef’s spaghetti western classics.

The Basis of Cad Bane’s Design 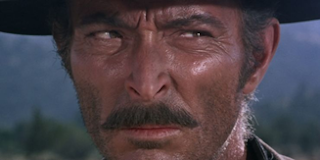 Thanks to his signature smoldering intensity, Van Cleef was typecast as a villain throughout his career. After a devastating car crash, the actor suffered severe injuries that nearly cost him his life, let alone his career. Van Cleef made a comeback when Sergio Leone cast him in the Dollars trilogy (after both Charles Bronson and Henry Fonda turned down his role) and made him a huge box office draw in Europe. Leone made Van Cleef a staple of the spaghetti western subgenre and effectively saved his career.

Van Cleef played two different characters in Leone’s groundbreaking Dollars trilogy. After A Fistful of Dollars introduced Clint Eastwood’s “Man with No Name” as a lone wolf, the sequel gave him a partner. For a Few Dollars More teams Eastwood up with Van Cleef’s Colonel Mortimer, a fellow tough-as-nails bounty hunter, to bring in a bounty that neither of them could take alone. Van Cleef’s introduction in the Dollars sequel is one of the most badass scenes in the entire genre: he impresses the Man with No Name by shooting the hat off his head, then shooting it a few more times as it sails through the night sky. Mortimer turns out to have a sympathetic motivation for taking down the villainous El Indio, which subverted Van Cleef’s usual antagonistic on-screen persona.

After subverting his villainous typecasting in For a Few Dollars More, Van Cleef played arguably the most iconic villain of his career in the trilogy-closing epic The Good, The Bad, and the Ugly. Van Cleef’s turn in the Dollars threequel – playing the role of Angel Eyes (a.k.a. “The Bad”) – has been the biggest influence on Burton’s portrayal of Cad Bane over the years. Angel Eyes is one of the three gunslingers (along with Eastwood’s returning “Man with No Name” antihero, “The Good”) searching for a hidden stash of Confederate gold. The movie culminates in a graveyard showdown that holds up as one of the best-directed sequences in the history of cinema. Cad Bane is certainly “The Bad” to Boba Fett’s “The Good,” leaving Eli Wallach’s role as “The Ugly” to be filled by Bossk or Dengar or someone. 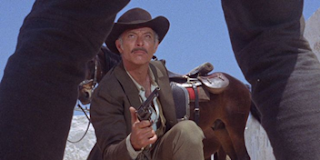 While Cad Bane’s design was taken from Van Cleef’s Dollars trilogy characters, his role in Boba Fett’s arc is closer to Tonino Valerii’s Day of Anger. For the uninitiated, Bane’s backstory in the Star Wars universe is that he’s the galaxy’s most notorious bounty hunter who took a young, orphaned Boba under his wing and taught him the trade of killing. This evokes the narrative framework of Day of Anger, in which Van Cleef plays a grizzled gunslinger who teaches a plucky young kid to shoot (and stand up for himself). Much like Boba did in The Book of Boba Fett’s finale episode, Van Cleef’s young protégé in Day of Anger is forced to take matters into his own hands when his mentor turns out to be pure evil and goes on a murder spree.

It’s a shame that Bane has been killed off so early on, because his live-action introduction seemed to set up a much larger arc, and there’s no limit to the revisionist western stories that can be told with a grimacing Cad Bane in the spotlight. But, in lieu of more Cad Bane action, Lee Van Cleef’s spaghetti westerns are timeless classics with the same “brooding gunfighter” energy.