We continue our search for filming locations for “Run, Man, Run”. Cuchillo and Dolores ride out of town to find the wagon carrying the printing press. They find the wagon but the printers have all been killed and are laying on the desert floor. As Cuchillo examines their bodies he is suddenly surprised by the two government spies. Instead of shooting Cuchillo on the spot they decide to face him in a duel. Dolores throws Cuchillo a knife and he faces Jean Paul while Michael becomes the referee. Jean Paul backs up out of range of the knife but Cassidy arrives and shoots his rifle at Jean Paul’s feet ordering to move closer until Cuchillo approves of the distance between them. Suddenly a knife drops out of Cuchillo sleeve and he throws it in Jean Paul’s neck before he can fire his pistol. Cassidy now faces Michael who takes off his gunbelt when he sees the army of Ramirez coming. Cassidy puts Dolores in the wagon and tells her to leave while he and Cuchillo lead the army patrol away. Michael suddenly grabs his gun to shoot her but Cassidy put a bullet between his eyes. Cassidy shoots and kills one of the soldiers to draw their attention and he and Cuchillo ride off with the army in hot pursuit. Cassidy heads for Texas while Cuchillo rides off to Mexico as Morricone’s music swells and the film ends. 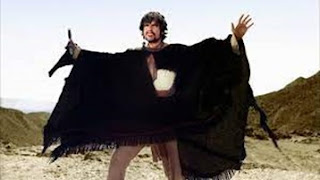 This scene was filmed in Rambla Otero, near Las Salinas, Spain.