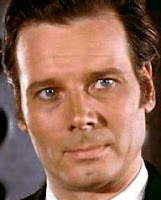 French theater, film and voice actor Jean Piat died in Paris, France on September 16, 2018. He was 93. Piat was born in Lannoy, Nord, France on September 23, 1924. He enlisted in the Comédie-Française on September 1, 1947, and became a member on January 1, 1953. He left the Comédie-Française on December 31, 1972, and became an honorary member the following day. He was an officer in the Légion d'honneur and the Ordre des Arts et des Lettres, and a grand officer in the Ordre national du Mérite. He was married to actress Françoise Engel (who died in 2005), and was a professor in the dramatic arts of the Simon Course. Piat was the French voice of Spike Goodfellow in the 2007 animated Euro-western; Go West: A Lucky Luke Adventure.
Posted by Tom B. at 6:34 PM