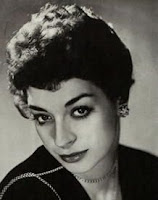 The Italian singer Katyna Ranieri, widow of the composer Riz Ortolani, died in Rome on the night of September 2. 2018. She had just turned 93 on August 31, celebrating with her family on the day when she also celebrated her wedding anniversary with Ortolani, who was born in Pesaro and died in 2014. She leaves her daughter Rizia and her son Enrico. She was the only Italian singer in the history of the Academy Awards to perform at an Oscar ceremony, singing the song “More” (theme of the film Mondo Cane ) for which Riz Ortolani received the Grammy award. Among her most famous interpretations: “Oh my Love” (recently revived in the movie Drive); “Forget Tomorrow” from the movie The Yellow Rolls Royce; songs from the Fratello Sole Sorella Luna soundtrack. Katyna Ranieri was also the author of many lyrics of the songs composed by Riz Ortolani, hiding behind pseudonyms like Benjamin, Mae Kroville and others.  Ranieri is the vocalist who sang “Johnny West” on the soundtrack for 1965’ “Left-Handed Johnny West” starring Mimo Palmara.
Posted by Tom B. at 10:51 AM