Who Are Those Composers ~ Marcello Giombini 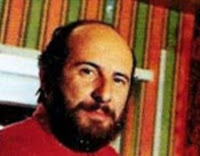 Marcello Giombini was born in Rome, Italy on July 8, 1928. His father was a music professor who specialized in the Oboe who also played in orchestras. Marcello followed his father in his love of music as a young man and was an organist in severl of Rome's churches, and he also conducted musicologist and philologist activities attending Roman libraries. For example, he is an edition of the Representation de Anima et de Corpo by Emilio de 'Cavalieri.

Giombini was also the director of the Choir of the Roman Philharmonic Academy, with whom he recorded Renaissance music records also for the famous History of Music edited by the RCA Italiana under the direction of Cesare Valabrega.

Giombini was also a composer of secular music and film music composing over100 film scores as well as being interested in electronic music. He was especially prolific in the genre of the “Spaghetti western” and he was a "pioneer" in Italy of the electronic music.

He has a son, Pierluigi Giombini, is known as one of the most famous composer of "Italo Disco" during the 1980s.

In the last years of his life, Giombini was engaged in a project to record 150 new psalms, drawing inspiration from the contemporary music scene (Celtic, new age ...).