Who Are Those Composers? ~ Carlos Castellanos Gómez 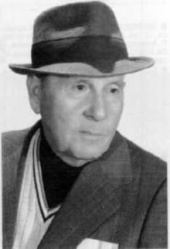 Carlos Castellanos Gómez was born on November 4, 1904, in Montalbán de Córdoba, Andalucía, Malaga, Spain. A member of a large family, Carlos felt a passion for music since he was a child: he enjoyed listening to the songs that the bands of the people interpreted at the fair parties or the funeral processions of Holy Week processions. He received his first solfeggio and piano lessons from a national teacher (Dona Carolina). Later he moved to Córdoba where he continued to expand his musical knowledge, and later, in 1931, to Madrid, since in his homeland he could not develop his musical hobbies sufficiently. There he works with Maestro Quiroga, studying the official studies of Solfeggio, Piano, Violin, Harmony, Composition, Counterpoint and Fugue.

His recognition and success was not long in coming. Among his creations highlighted by the “La morena de mi Copla”, of which more than two hundred versions have been made. It was written by Jofre and Castellano and put to music:

Julio Romero de Torres painted the dark woman, with the eyes of mystery, and the soul full of grief. He put in his bronze hands, the cantaora guitar, in his refrain a sigh, and in his chest a pain. Morena, the one of the red carnations, the one of the flowery grid, the queen of the women. Brunette embroidered shawl, that of the cheerful guitar, that of the Spanish carnation.

Other songs were: : “Bajo mi cielo andaluz”, “El cordón de mi corpiño” and, especially the popular song “La luna y el toro”, which it won the award for the most popular author of the year, awarded with the Golden Plate for the best song by the National Radio of Spain and Antena Trophy by Radio Spain.

Castellanos also composed the music for thirty successful films. His songs have been interpreted by Estrellita Castro, Angelillo, Pepe Marchena, Sara Montiel, Lucho Gatica, Marisol, Antoñita Moreno, etc. He was a member of the Societies of Authors of Brazil, France, Germany, Argentina, etc., and his fame has crossed national borders.