Spaghetti Western Trivia ~ Bears and “The Last of the Renegades” 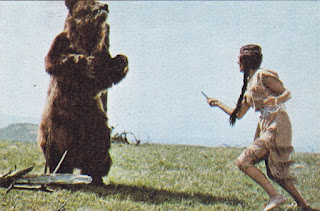 In the 1964 Euro-western “Last of the Renegades” a bear is seen in a fight scene during the opening of the film. Winnetou (Pierre Brice) comes upon Ribanna Karin (Dor) being attacked by a bear. He comes to her rescue and slays the bear with his knide. Three bears from a German circus were flown to Croatia for the filming and the trainer wore a Winnetou costume during the journey so the animals would become familiar with the Indian costume. Still, the trainer had to wear a bear costume for the actual fight sequence when it came time to shoot the scene. We only see a few frames with an actual bear.