Who Are Those Composers ~ Marcello Gigante 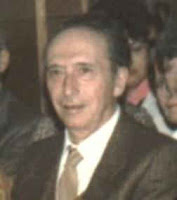 Marcello Gigante was born in Rome, Italy on July 23, 1910. He was a very versatile composer who wrote the score not only over feature films, but also popular hits such as "Nu tantillo 'e core" and "Desiderio 'e sole" (1st prize at the Festival of Naples). He was also a composer of what is called Library Music which is used as background music mostly on television but also in films of the 1950s and 1960s.

He later dedicated his skills to composing for children with such songs as "La pianola stonata” (The Out of Tune Piano) and “Il trenino di latta verde" (The Little Green Tin Train).

Marcello died in Italy sometime in 2002.