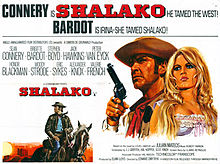 50 years ago today the British film “Shalako” premiered in Germany. The Euro-western was directed by Edward Dmytryk and starred Sean Connery and Brigitte Bardot. It was filmed in Almería, Spain. The cast also included Stephen Boyd, Jack Hawkins, and Honor Blackman. It is based on a novel by Louis L'Amour.

The story is about a hunting party of clueless European aristocrats, guided by a cowboy named Bosky Fulton who leads them into hostile Apache territory. Becoming separated from the group, Countess Irina Lazaar experiences the first run-in with an Apache, which results in the tracker Shalako coming to her rescue. Shalako urges the leader of the hunting party, Frederick von Hallstatt, to leave, but he refuses and the two men soon despise each other. Shalako rides off to get the army to escort the party off Apache land, but the Apaches attack and would overrun the party but for a smoke signal ruse of Shalako from some distance away.

The devious Fulton takes advantage of the lull in the fighting; he and his men take the hunting party’s main stage coach, plus all the weapons and supplies, leaving the hunting party at the mercy of the Apaches. Lady Julia Dagger (Honor Blackman), seeing the hopeless situation of the party, decides to leave her husband, the pathetic Sir Charles Dagger (Jack Hawkins), and go along as Fulton’s lover. She and Fulton had previously teased each other in a sexually fraught manner.

Shalako returns to the stranded hunting party, which is re-equipped with weapons and supplies he had previously advised them to hide in reserve. He hopes to lead them on foot to a plateau where they will be temporarily safe. Shalako and von Hallstadt continue to feud, but over time their feelings evolve to mutual respect.

The Apaches attack the stage coach, killing all Fulton’s men as well as Lady Julia. Fulton, having watched her killing, joins up with the hunting party. After they rebuff an initial Apache attack, the humiliated Sir Charles challenges Fulton, and they fatally shoot each other.

Chato and some other Apache warriors come up behind the Europeans, catching them by surprise. Chato challenges Shalako to a one-on-one fight with spears. Chato loses and is about to be killed when his father, the Apache chief, intervenes. He gives safe passage to Shalako and the others in return for his son's life. Chato storms off, feeling disgraced. With the surviving members of the party safe, Shalako rides off into the western landscape, accompanied by Countess Irina. 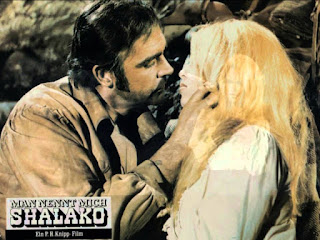